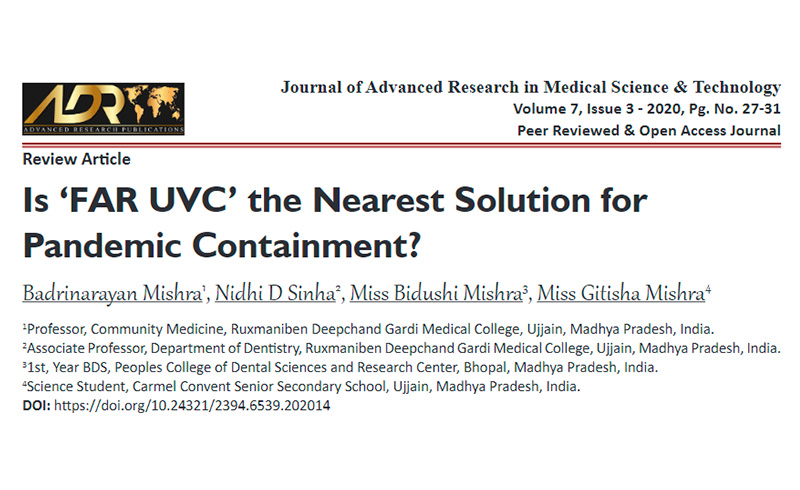 Mass production of LEDs with this sweet-spot in UV emission, and their integration into everyday lighting is seen as a viable alternative in modern-day fast paced consumer centric world for pandemic control. The need for radical approaches like complete lockdown may not be an absolute necessity as the spread can be checked at its origin and the outbreak may not reach to a pandemic level. A combination of no touch methods like FAR UVC along with chemical disinfectants like hydrogen peroxide, glutaraldehyde and insertion of different microbial filters like VAPA filters can be a lasting solution for controlling pathogens at high risk settings like hospitals and the non-touch devices for use in other low risk areas like market places, houses and transport sectors are going to be the new normal in future pandemic preparedness. This approach too can be used for curtailing nagging public health issues like seasonal influenza, tuberculosis and its resistant forms, mumps-measles-rubella control, containment of chickenpox etc. which are responsible for hundreds of thousands of deaths and a tenfold increase in terms of their associated morbidity from which people around the globe suffered every year.

• The supper fast killer, FAR UVC kills the dreaded C. difficile spores present as surface contaminants in seconds in contrast to hydrogen peroxide vapour which takes 45 minutes to do the job.

• The benefits of FAR UVC (207-222nm) as non-hazardous and potent germicidal agent lie in its strong absorbance into and high energy production on contact with biological materials.

• The high absorbance by surface biological tissues such as stratum corneum which is 5-20 μm thick and made up of proteinious tissues without nuclear material containing DNA are strong armors that absorbs the FAR UVC band. Similarly ocular surface epithelium takes the shine out of the FAR UVC’s mammalian tissue penetrating properties thus, making them safe for use in areas of normal human activities.

• The broad spectrum germicidal power of FAR UVC 222nm, the strongest and safest of them all is attributed to the biological penetration and heat generation properties which the tiny microbes find very harsh and hostile. It affects their DNA and RNA molecules by denaturing them (killing the microbe) and inhibiting replication that to at a very minimal dose over a very short exposure time.

• Some examples of their claimed efficacy are substantiated as: FAR UVC 222nm light kills >95% of airborne aerosolized H1N1 influenza viruses at a very low dose of 2 mJ/cm2.

• The efficacy of far-UVC 222nm against airborne human corona viruses alpha HCoV-229E and beta HCoV-OC43 has also been proved. In a study involving the beta-HCoV-OC43, it was observed that continuous exposure of aerosolized droplets with similar sizes to those generated during normal course of sneezing and coughing to 2 mJ/cm2 which is below the present recommended dose of 3mJ/cm2/hour of UVC 222nm in occupied public locations can lead to 90% viral inactivation in 8 minutes, 95% within 11 minutes, 99% in 16 minutes and 99.9% within 25 minutes of exposure. Thus the bottom line is; FAR UVC is a strong and proven contender for uses in public places with human activities at a dose that is devoid of its exposure related health hazards.The genomic and physical size of virusues plays a detrimental role to radiation response. As all corona viruses have comparable physical and genomic size FAR UVC can be the answer to the lethal weapon we are searching for the containment of the present COVID 19 pandemic and most future pandemic that may crop up in time to come.

• The current evidences if taken by their claims may
make it feasible and safe to use the FAR UVC that can be generated by using inexpensive excimer lamps, that emit continuous low-dose in public places thereby, reducing the probability of person-to-person transmission of the novel corona virus and other seasonal viruses like influenza, MDR and XDR Tuberculosis and any unforeseen organism that may threaten human health in future.

• We can also design portable and fixed sterility devices using FAR UVC light emitting diode LEDs and incorporate them into Dental chair light units for ensuring killing of oral pathogens/ microorganisms including present COVID 19 ones thus providing dentist a safe oral cavity to carry out their procedures. The same concept can be used in ENT head light units to ensure work safety for ENT surgeons. For ophthalmologist the different examining light sources can be re-enforced with germicidal FAR UVC bulbs to ensure work safety. The portable units with FAR UVC 222nm bulbs will provide the much needed flexibility in ensuring disinfection in hospitals and other common places including use at common households. Their efficacy in high risk settings can further be enhanced in order to ensure complete inactivation by combining their use with other surface disinfectants i.e. hydrogen peroxide, glutaraldehyde, and microbial filters like VAPA which can kill/remove organic contaminants whose presence usually adversely affects the germicidal ability of UAR UVC light.

Currently, the most effective and safest way to fight against COVID-19 is far uvc 222nm technology, but experts warned that some of the products are not certified.

A key advantage of the UV-based approach is that UV light is likely to be effective against all airborne microorganisms, in marked contrast to vaccination methods. For example, while the inactivation efficiency of UV light will almost certainly vary as different strains of influenza virus emerge, they are unlikely to be significant. Similarly, as multidrug-resistant variants of bacteria emerge, their UV inactivation capacity is unlikely to vary greatly.

Care222 is a new disinfecting light source that, even though not harmful to the skin or eyes of humans or animals, deactivates bacteria and viruses in the same manner as conventional ultraviolet sanitizers. It can be installed in a high location, such as on the ceiling, to irradiate its entire surroundings. This makes it possible to deactivate or eliminate a wide variety of viruses and bacteria both in the air and on environmental surfaces.

Care222 uses an excimer lamp (a mercury-free UV excimer light source produced by Ushio especially for outputting monochromatic ultraviolet with a primary wavelength of 222 nm) in combination with a special optical bandpass filter (200 to 230 nm) which passes only ultraviolet wavelengths that have no harmful effect on people.

Ushio holds exclusive rights to utilization of the key technology, which was patented by Columbia University (New York, NY) in 2012.

Only 222 nm, which is filtered by a special optical bandpass filter for the rest of the harmful wavelengths, is safe for humans.

The use of Care222 in public places is a safe and effective way to limit the spread and transmission of air-mediated microbial diseases, such as schools, hospitals, stadiums, sports grounds and offices, and this approach may help to limit seasonal infections, the spread of tuberculosis and major epidemics. It’s inevitable far uvc will become part of the new World people are more aware and want to be protected from viruses.

• Does not cause sunburn, skin cancer or cataracts

Ultraviolet rays with a wavelength of 222 nm are absorbed by the cornea of ​​the stratum corneum of dead cells, so they do not cause damage such as sunburn, skin cancer, and cataracts.

Ultraviolet rays with a wavelength of 222 nm destroy the DNA / RNA structure of viruses and cells, and suppress and sterilize them.

• Continuously disinfecting in occupied space but not harmful to skin and eyes of people, which could be used in dental offices, medical rooms, high-end offices, elevators, hospitals, class rooms, etc. 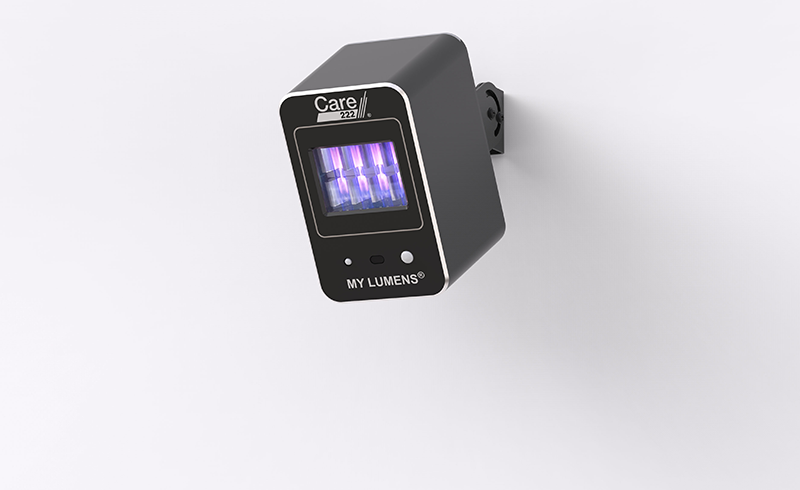 Any thing you want to know from us ?