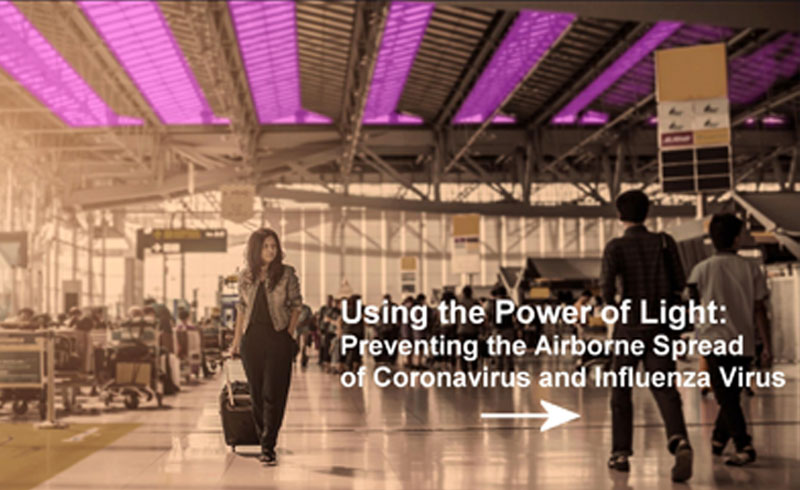 Far ultraviolet-C light can reduce the level of airborne microbes in a room by more than 92%, according to a new study by researchers in the UK and the US. The result suggests that lamps operating at this wavelength could be used to combat common airborne viruses, including SARS-CoV-2, and thus prevent the transmission of diseases like COVID-19.

Testing far-UVC krypton chloride excimer lamps against S. aureus
In the new work, scientists from the universities of St Andrews and Leeds in the UK and Columbia University Vagelos College of Physicians and Surgeons tested the efficiency of far-UVC krypton chloride (KCl) excimer lamps in a specially designed room-sized chamber at Leeds. The researchers ventilated this chamber at the same rate as a typical home or office – that is, around three air changes per hour. They then released aerolized S. aureus bacteria into the space continuously, allowing the pathogen load to reach a stable level before sampling the air for an hour.

Wood adds that the trials have produced “spectacular results”, far exceeding what is possible with ventilation alone. “In terms of preventing airborne disease transmission, far-UVC light could make indoor places as safe as being outside on the golf course on a breezy day at St Andrews,” he says.

Team member David Brenner, who leads the Center for Radiological Research at Columbia, says that far UVC-light should be just as good at inactivating current and future variants of SARS-CoV-2; new infectious viruses that have yet to emerge; and “old-fashioned” viruses like influenza and measles. The researchers foresee that far-UVC could become an important “hands off” tool, alongside filtration and ventilation, in a global move towards reducing airborne transmission of disease and improving indoor air quality.